The youngest won't be familiar with this name, but for us, grey haired 40+ year olds, Kevin Adams is a living legend. He made the best goblins, the best shields, the best snotlings... Even his fantasy orcs had an effect on modern versions.

This isn't a complete post nor a detailed list about Kevin's career, but a nostalgia-induced ramble about the spirit of the greenskins that made me love this hobby when I was young. I'm 43 years old and there's not a single GW Gloomspite release that doesn't  trigger this response on me:

The mix of evil, crazy and comical look of Kevin's sculpts (I'm talking specifically about the faces) is unique and inimitable, and lasts to these days in modern goblin sculpts, GW or not. And proof of that is even his newest and less known sculpts got that magic.

Let's start with the most recent example. As GW doesn't like to say who sculpted what (don't get me started with the concept artists), we may never know who made the last Squigboss. But we've seen armoured goblins suspiciously looking like the ones in Labyrinth. Take a look to the Squigboss and then look at the Bulbus Peppernose and his retinue:

More on this: The last Warhammer Underworlds: Gnarlwood warband, The Loonking Court has a guy called Pokin’ Snark who looks like the Biting Sticks from Bulbus' army:

Back in the day, Kevin sculpted the best goblins (night goblins, forest goblins, squig hoppers, fanatics... You name it). Those were the first I saw when I got my first WHFB box

But he also made the best warmachines and shields. You'll recognise them in these news designs:

He also was responsible for the best space orks (some of them based on the even better Paul Bonner illustrations). Here's the last example you've seen on WarComm, painted by the awesome Andrew Park, including some of Kevin's models:

Now compare the new Snotling Pump Wagon for BB with the WHFB old one. The fungus flinga, the trumpeteer, the one with the slingshot... All are in the new Blood Bowl team kit:

And the last but not least: The Krule Boyz.  Besides the faces on their shields coming directly from Kevin's awesome faces (not only seen in greenskins, but ogres too), the spindly and pointy designs are clearly based on his models. WarComm even said that on an article but I can't find it myself (maybe it's been expunged from the records). I'm sorry about the quality of the pictures (and the meme) but I couldn't find the ones I wanted.

So, wrapping this up, I hope you like Kevin's work if you didn't know him (or couldn't match the name and the art). For the grognards like me, good luck not impulse-buying everything from eBay when you close this tab.

Cargad! 2022 series about all the Kevin Adam's models.

PS: If you've seen this lad I painted last week you may have noticed the L sign he's doing. The inspiration for this came from this Night Goblin: 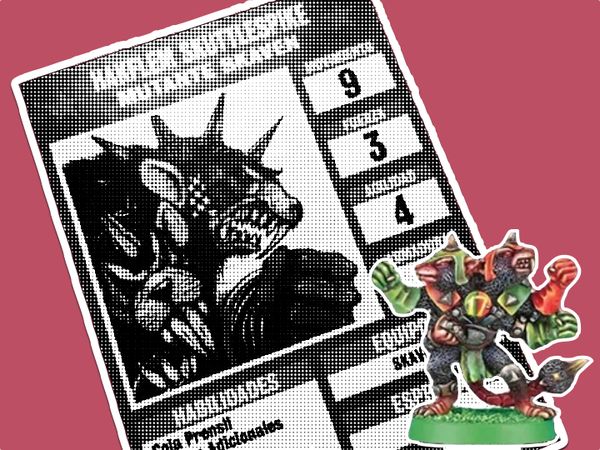 There was a time when the young Hakflem was a little less of a cheater, and only had killed a couple of teammates, making a living of Blood Bowl jumping from an Underworld Challenge team to another, stabbing his opponents and stealing the ball like the rat he is