Yesterday we saw for the first time the new Darkoath models from GW. This time, they are not an Underworlds warband or an AoS unit. They come in the form of a Warcry warband included in the next boxed game.

For me it's been a long time since I wrote this piece about Darkoath, the AoS lore involing human tribes, and the design clues we saw in the first models.  And it seems I was right in my musings.

This new warriors come with big thighs, scarred chests and muscled bellies as every strong barbarian should. The weapons are a little bit different from previous designs (I like the new swords but the axes are a bit off).

But all the other elements are here: Bird skulls, pelts, demon plate and runes. In any case, there's a different approach to the clothes, now showing belts or ropes tying their legs.

The new models are a really good upgrade (for my taste) compared to the Spire Tyrants (those kneepads or the belt buckles were horrible). This bunch of chaos thugs include 3 models that need special attention (we don't know their names yet):

I would talk for an hour about this models, but I think it's better to show with images, so look at my "visual abstract" or click here if you want to download it in a bigger format to look at it later (56 Mb).

As a final note, I wanted to say that the different body shapes are very welcomed, and that's nice added to the fact that half of them are women (young and old). But I don't know if it's because of the painting, some of the chaos ladies faces look a bit weird.

I'm happy with this warband as it looks now, but like what happened with the Scions of the Flame, buying an expensive  box for one band is a no-no for me (so, if you live in Spain and want the scenery and the Spider guys, hit me on twitter).

See you next time!

EDIT: Looks like GW just published the sprue contents, so here it is, so you can start planning your conversions (cool swords, tons of axes and a bird-skull flail, yay!). 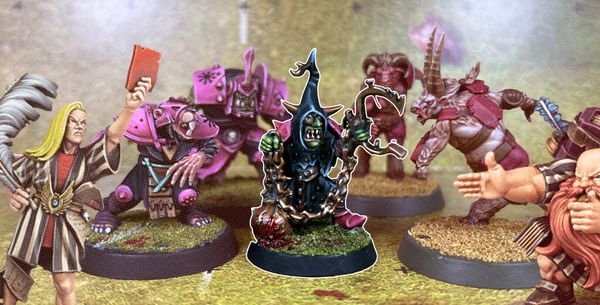 Here's my version of Fungus (kinda, let me explain it later) for my Chaos Renegade team. I painted him in 3 hours.